Behind the Banyan Bay resort, right on the beach is the seafood restaurant Pier366. I’ve seen pictures online from other patrons showing what they ate and it looked yummy! We had no plans for lunch so I wanted to find out what they served. I didn’t want the usual lunch items. I wanted to see a menu with a little more variety to it.
Alas, no menu on their website. But there was a “Chat with us now” tab. I clicked on that and instantly I was connected with customer service. Lilian C was the representative I was chatting with.
I asked if there was anyway to see a menu and she said she would send me today’s menu! Seeing the menu made it a done deal. The prices were set in Belize and VERY reasonable for a 4 star restaurant (according to Trip Advisor) right on the beach. So this is where we picked.
We walked along the beach from our apartment to Pier366. It was a quiet afternoon and a 15-minute walk. Slowly in the distance you start to see a pier with a gazebo that is for special occasions and by reservation only.

The rest of the restaurant had seating mostly outdoors and a small indoor dining area (in case it rains). The wine bottles on the walls made an interesting display.

There is no comparison to the location/atmosphere.  Located right on the dock with the water splashing around you; you can’t beat it.  Off the dock accommodation is great as well.  The seating under the pergola is also very nice with plenty of shade from the mid-day sun and a beautiful view of the reef.
We were seated and taken cared of by Bianca. She remembered me from Valentines Day dinner. You get that a lot here on the island – servers, bartenders and storeowners remembering your name. 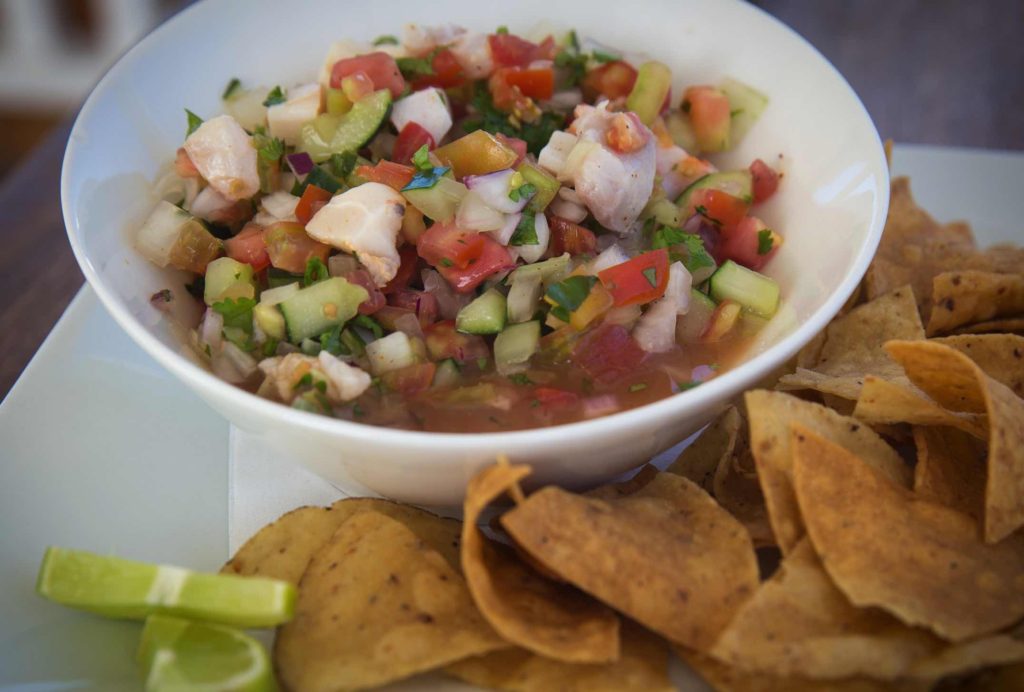 We decided to get some appetizers to start out with. I am still on the hunt for ceviche with octopus. On the menu they had the mixed seafood ceviche, which included fresh caught fish, shrimp, conch and octopus. I ordered it for us – hold the jalapeños. It arrived and I went on the hunt for Octopus… there was none. 🙁
Scott wasn’t too crazy about the ceviche.  He felt there were plenty other places whose ceviche he preferred.  It tasted a little bland to him but then again, I asked for minimal spice.  One of the things he really likes about ceviche is the strong lime flavor but that wasn’t the case for this one. 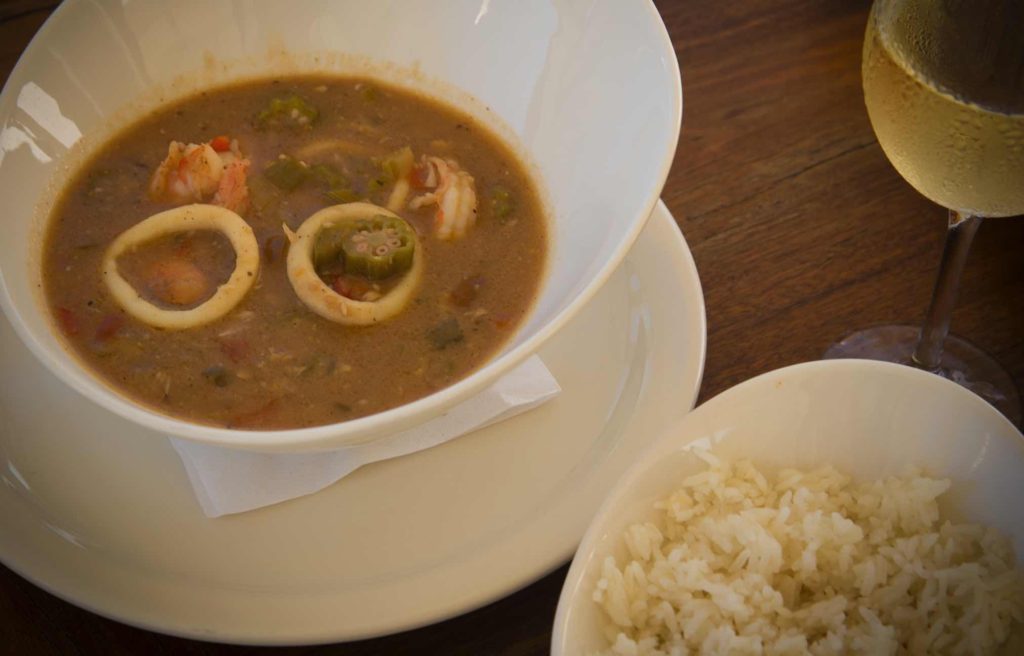 Continuing with the appetizers, Scott ordered the Seafood Gumbo.  It was flavorful with chunks of okra, shrimp and calamari rings.  Visitors from New Orleans may be disappointed but it was very satisfying and came with a bowl of tasty coconut rice. 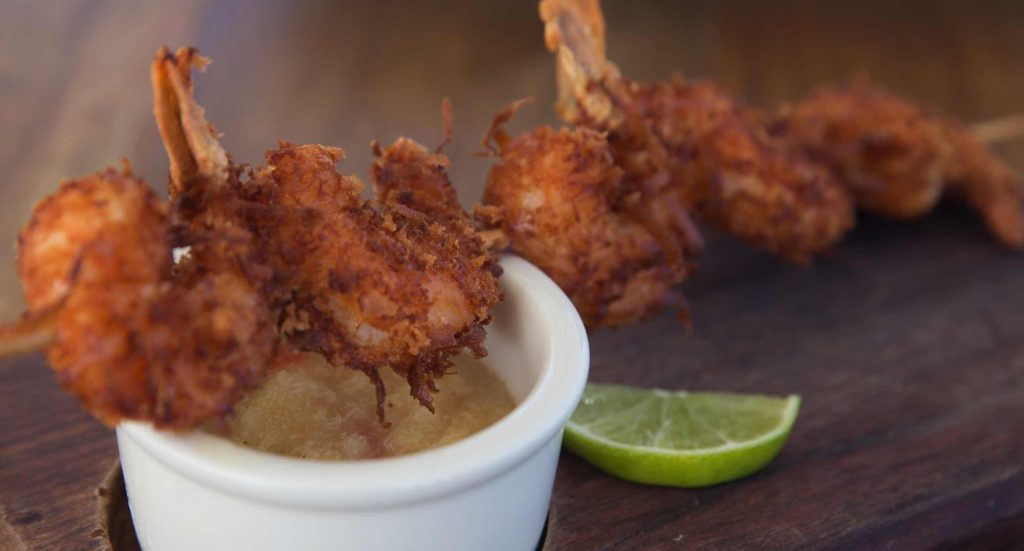 Our final appetizer was the Coconut Shrimp. This was a delight for me. It was very tasty and went very well with my virgin Pina Colada. It wasn’t over fried nor greasy and cooked to a nice crispy golden brown. Some places serve it with a spicy sauce. The Pina colada sauce was just right. Hmm. Maybe that’s why it fit well with my drink?
Scott’s take on it: The shrimp were good.  Maybe a little better than some other places but not vastly superior.
For our main course – Tacos 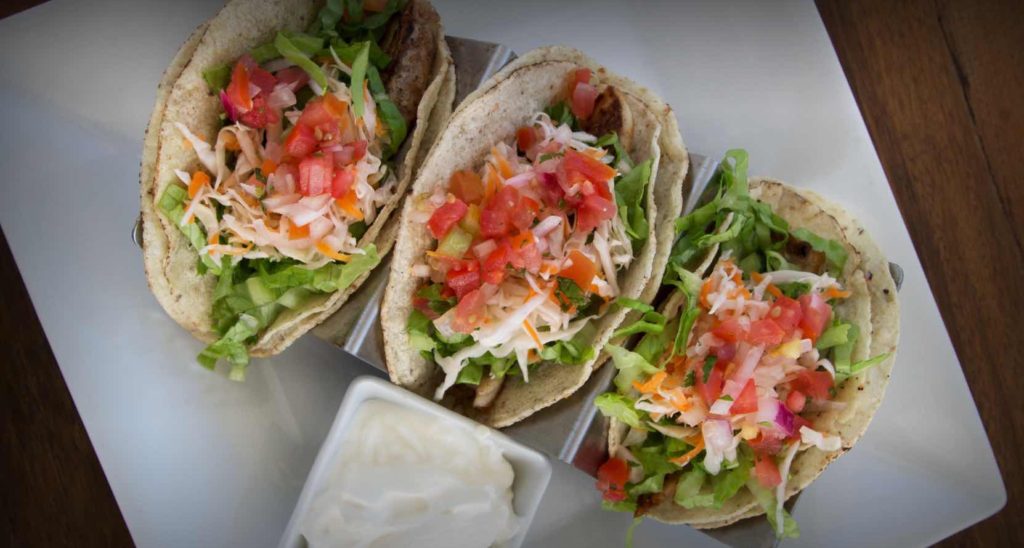 Scott ordered the Blackened Fish Taco Trio, which he said, were very good.  They contained a good amount of fish and plenty of fresh cabbage, carrots and tomatoes.  He liked that they had double tortillas so they didn’t fall apart while trying to eat them.  They were served with plenty of sour cream as well.
I had the Shrimp Taco Trio – I agree with Scott. A good amount of fillings and shrimp. I added avocado to mine. The avocado was about to become over ripe. But still good! I wish I read about the spicy chipotle cream sauce and asked for it on the side. That kick was too much for me because I don’t do well against spicy foods. I dissected the tacos and mixed it with the avocado and turned it into a salad. 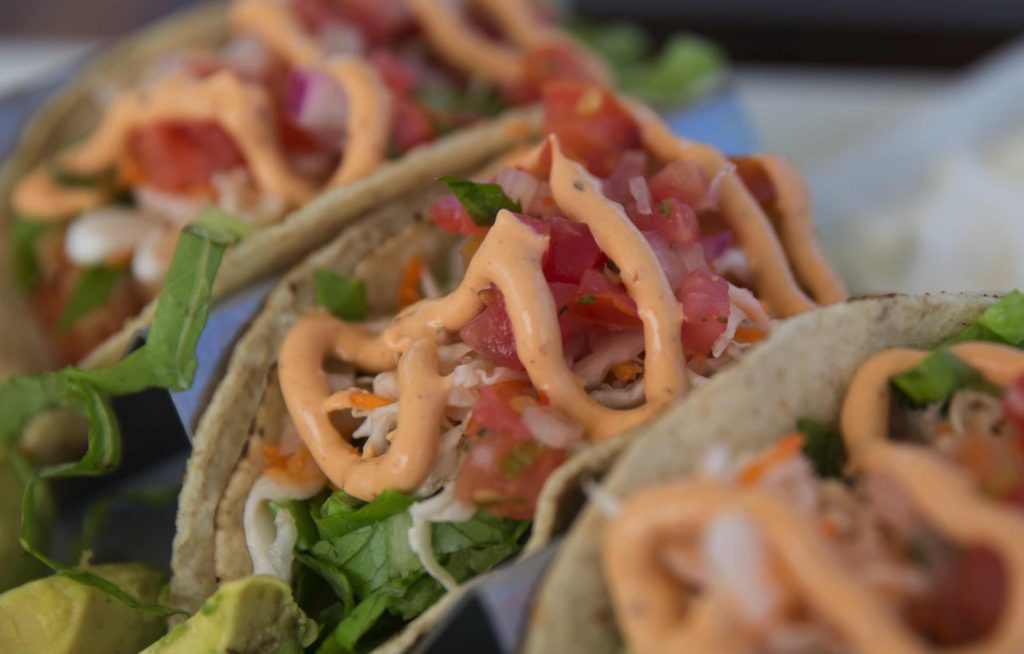 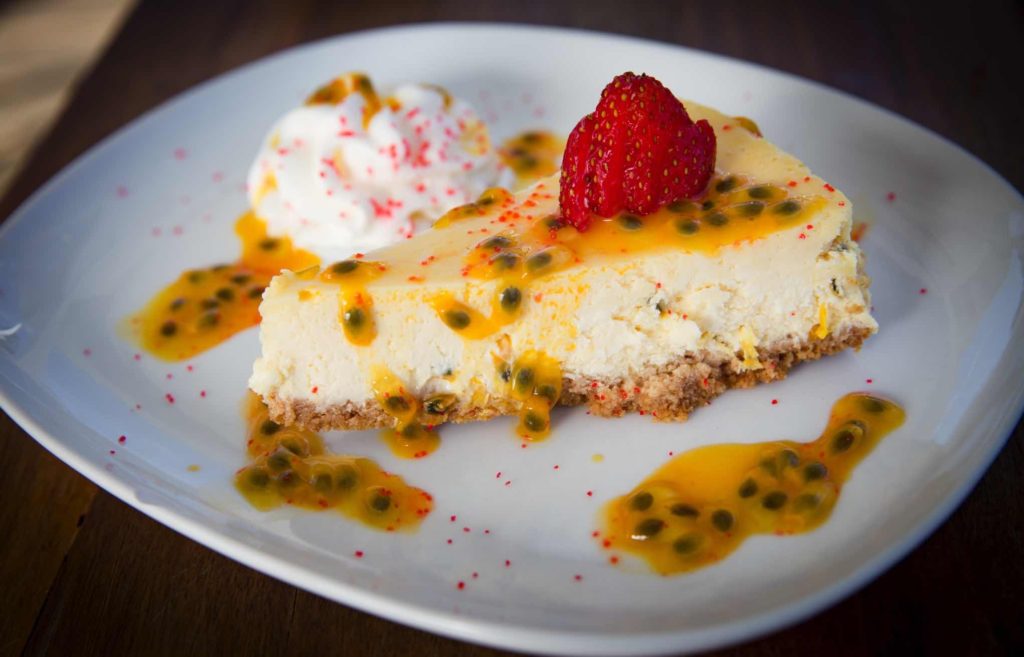 While the food was good but not the best we’ve had, the price was right and the atmosphere was absolutely amazing making this one of our favorite restaurants on the island.